First of all, what a beautiful, unspoilt, lusciously green place. I feel embarrassed to say that I didn’t know anything about Tasmania at all before we came (except for the Tasmanian devil which I originally thought was just a cartoon not an actual animal…). We wouldn’t have to be asked twice to go back. We originally added it as a stop on our trip to visit an animal sanctuary and see some real life Tasmanian devils (which actually look nothing like the cartoon), but it has SO much more to offer than that. Endless greenery, vast landscapes, incredible bays and mountains to explore. We had 3 days here and oh how we wished we’d had longer…. it is definitely on our return list.

We only saw the capital city and so I can’t give a full description of the entire state, but I’ll do my best to give you a flavour of the wonder that is Hobart.

Mount Wellington- we drove right to the top in Terry the snot-coloured Toyota ( see below) and could see absolutely nothing. It was hilarious as we saw masses of photos of what it SHOULD have looked like, but the fog was ridiculous. The viewing platform was pretty amazing though because we just felt like we were in the clouds. As we drove back down, the clouds cleared and the view over Hobart was beautiful, definitely worth the trek up there.

Salamanca Place- lots of charming shops, galleries and cafes in a quaint little square. There’s the famous Salamanca Market here too, but unfortunately it wasn’t on when we were here. Kelly’s Steps in Salamanca Place take you up to Battery Point- a lovely old neighbourhood with really pretty 19th century cottages- worth a stroll around.

St David’s Park- we spent a couple of hours relaxing here in the sunshine one afternoon. It was pretty near our hotel so it was our little slice of green in the city. There’s also the best coffee sold here in the mornings from a tiny cart. The girl running it was so lovely, chatting to us about Hobart and we also bought one of her delicious homemade raspberry dark choc brownies.

Royal Tasmanian Botanical Gardens- now if you’ve read any of my other travel posts, you’ll know we’re suckers for a Botanical Garden. This one didn’t disappoint. 100% would recommend. A stunningly beautiful, absolutely immaculate, green haven. Not the biggest, but free to go in and one of my favourites we have visited.

Bonorong Wildlife Sanctuary- this was about half an hour drive from Hobart and marked our first up close interaction with kangaroos. We absolutely loved it. It’s not huge, but definitely a must see. The rangers look after injured, orphaned and endangered animals and you could see how much they truly cared for them. There were huge boxes full of kangaroo food all over the sanctuary which were free to take from ( I literally emptied my handbag and filled it with food) and then you could just slowly walk over to a kangaroo, crouch down and let it feed right out of your hand. Sam virtually had to drag me out after, I just wanted to keep doing it! The babies were absolutely gorgeous, climbing in and out of their mum’s pouches, with such fluffy fur and fluttery eyelashes. We also saw a male kangaroo standing like a bouncer here which gave us a laugh (see below)

It was here we saw our first Tasmanian devil. Actually much cuter in the flesh and pretty small. We saw loooads of other animals here- a baby wombat, koalas, eastern quolls and bettongs…. to name a few!

MONA- this was one of our favourite things in Hobart. A huge, immersive art experience/gallery mostly underground. Firstly, the building is absolutely amazing, on an island of its own and the architecture will blow your mind. We felt as if we’d been in a weird dreamworld for a few hours when we came out. Films, paintings, sculptures, experiences, sounds, experiments…anything and everything goes at MONA. I feel like it’s extremely hard to describe, but just trust me on this one, don’t miss out. I’ll add some of our photos down below, but I don’t want to add too much and ruin the surprise!

We went to NoHo (North Hobart) for 2 of the nights for dinner and I would say that’s the main foodie area.

Bar Wa Izakaya- Japanese cuisine. Double yum. We had the tastiest dumplings and crunchy, fresh Asian salad there and the ceiling was covered in fairy lights with sake bottles hanging down, a really cool spot.

Metropolitan Pizza- Sam found this pretty new restaurant modelled on the London underground with vintage train chairs and tables. The menu was set up like a metro map and we had the yummiest pizzas. Sam had one that genuinely tasted like a double cheese burger. Don’t knock it until you’ve tried it- a pure genius creation.

Scallop Pie- we shared one of these (wish we’d got our own) for lunch, bought from a little floating cafe in the harbour. Native to Tasmania and I couldn’t recommend them more. Fresh golden puff pastry full to the brim with curried scallops- wow. *Mouth is watering as I write this*

Hobart truly is a special place and totally different from mainland Australia. It was gorgeously unspoilt and peaceful, with super friendly people and some brilliant activities. We tried to cram as much in as we could, but we will definitely travel around it for longer next time! I hope this gives you a little glimpse into “Tassie”….thanks for reading. Xx 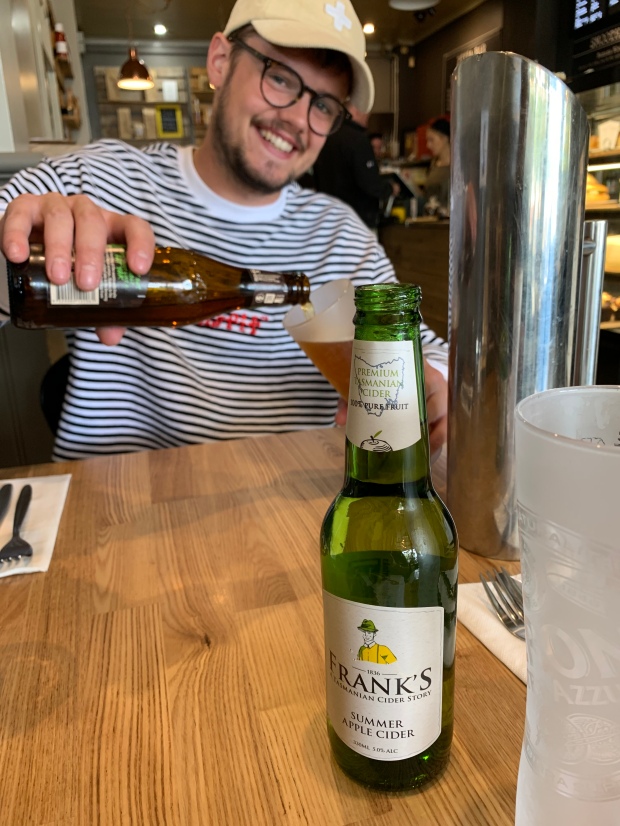 A side street near Salamanca Place 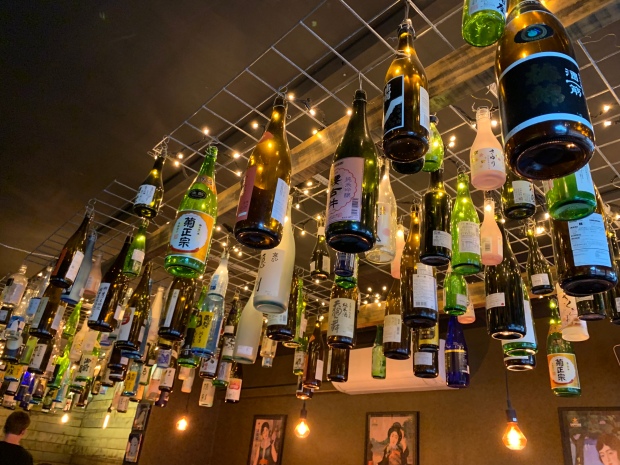 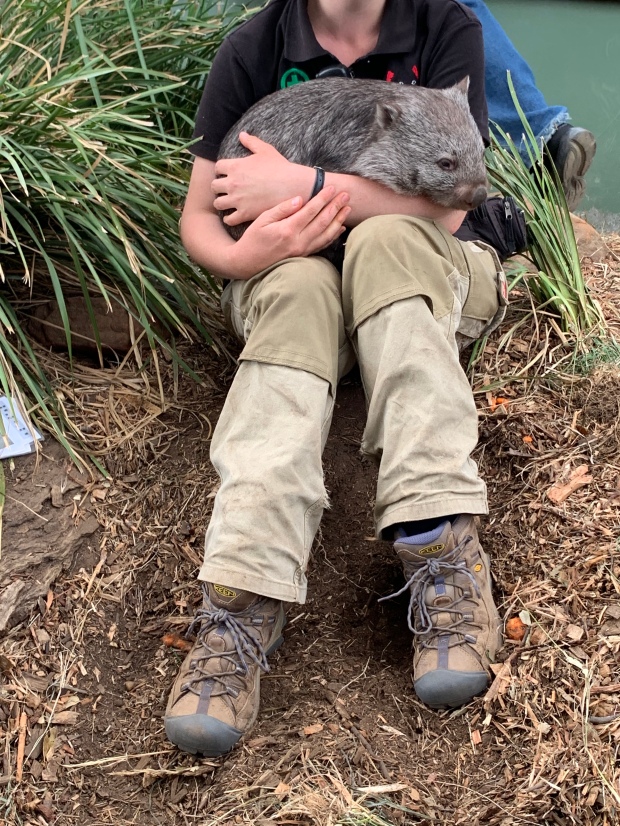 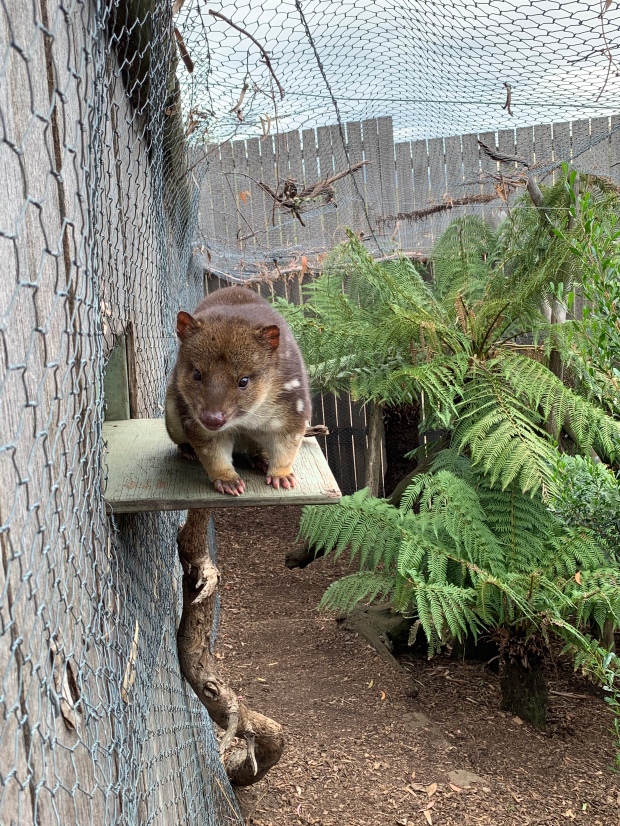 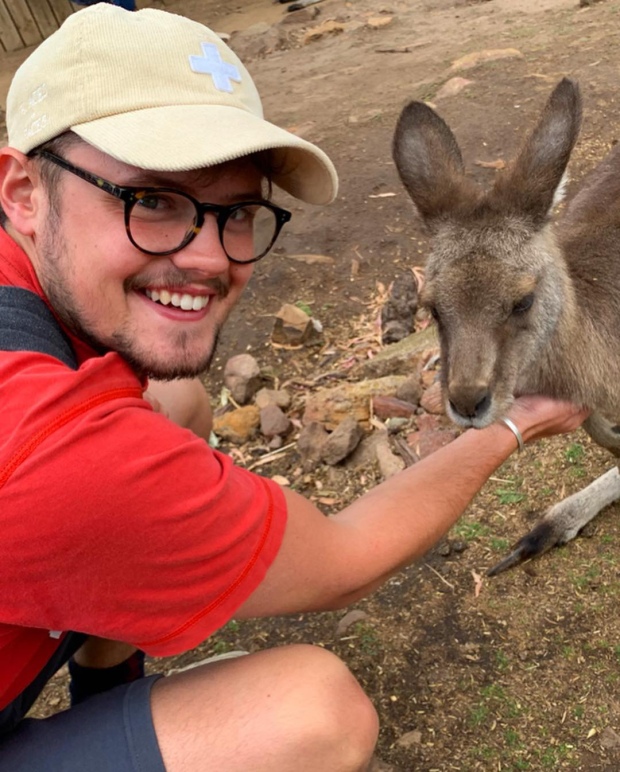 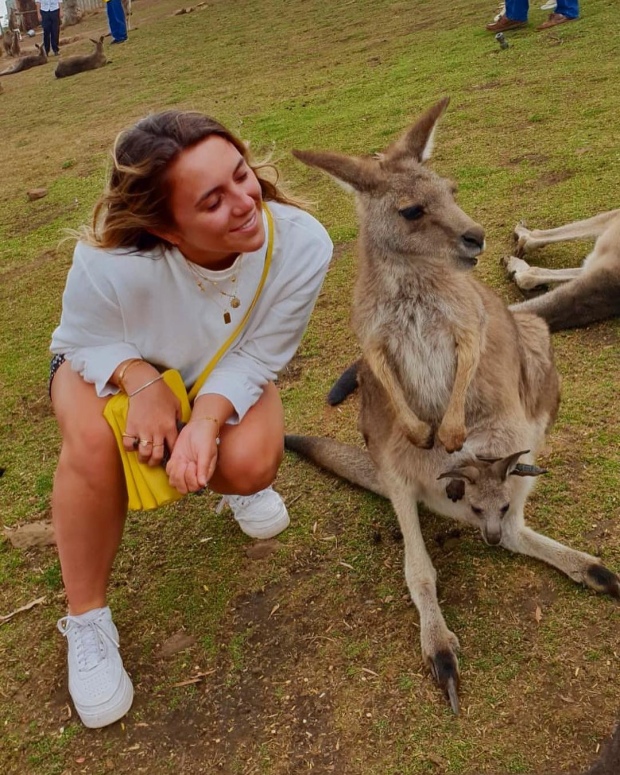 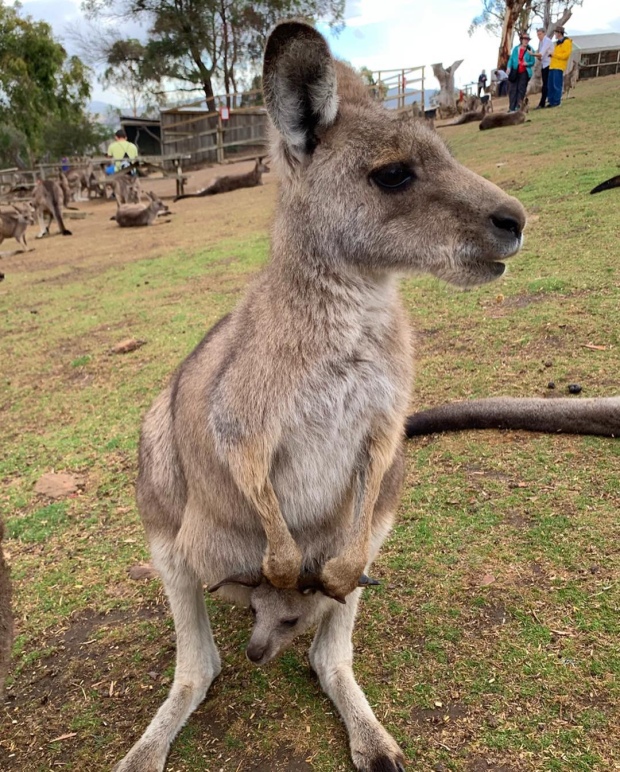 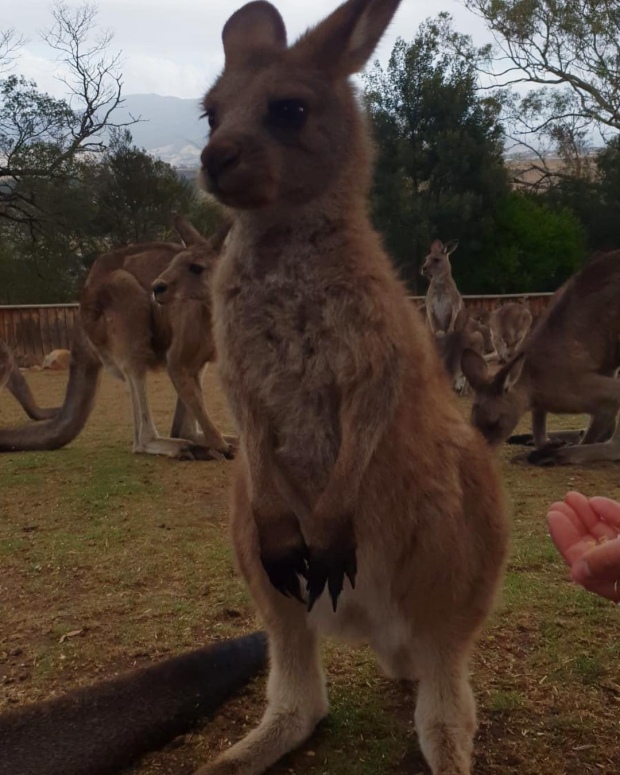 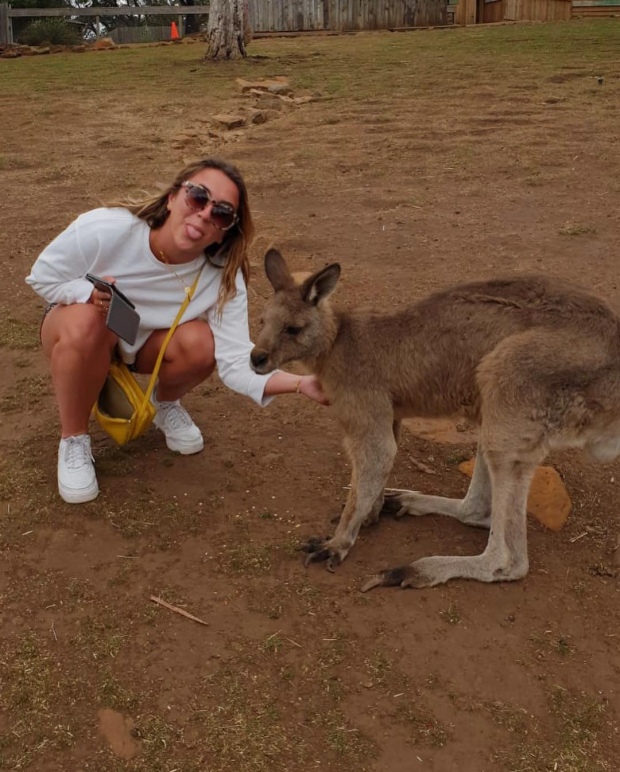 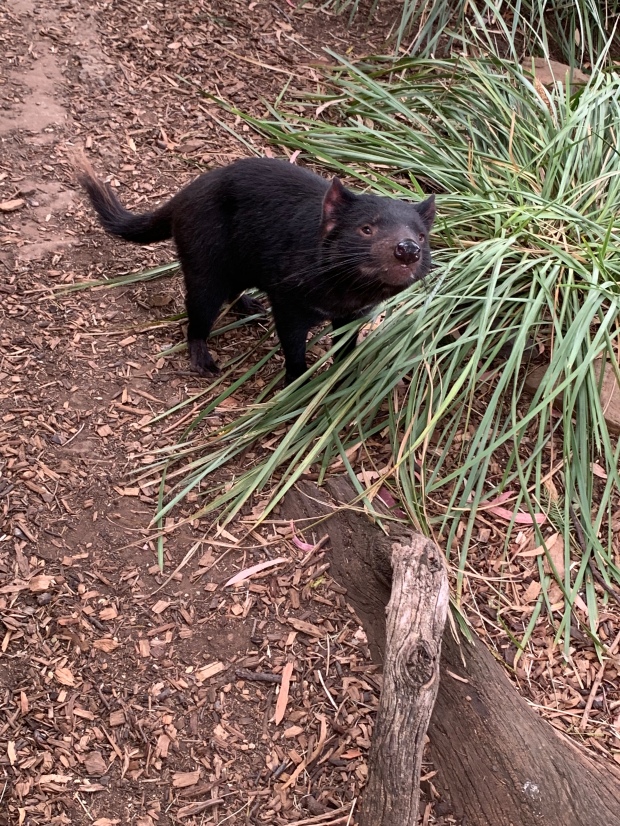 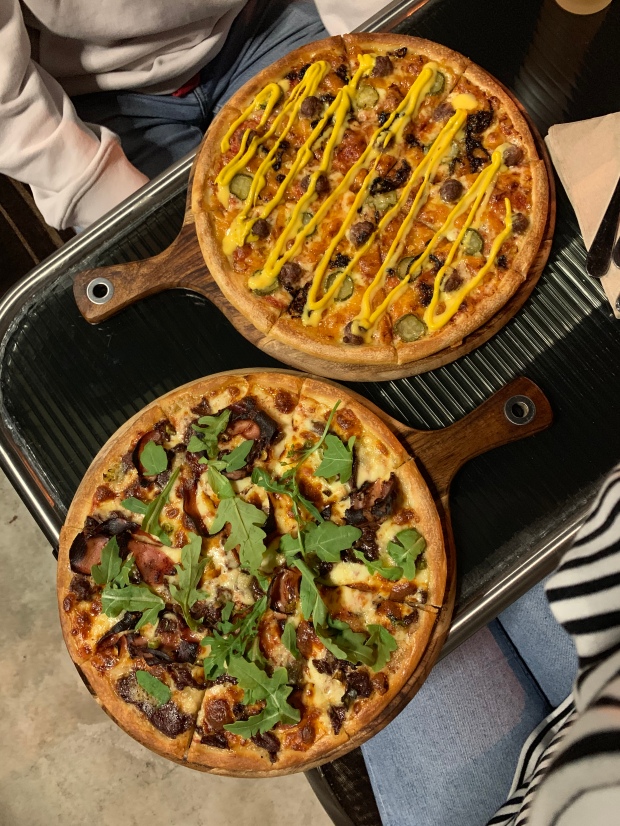 Near the top of Mount Wellington- windy!!! 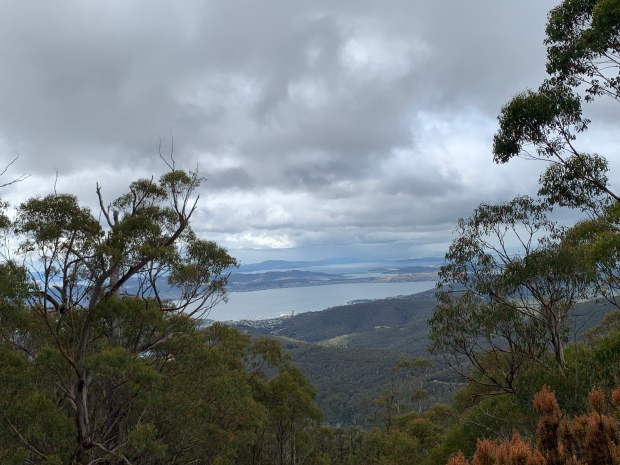 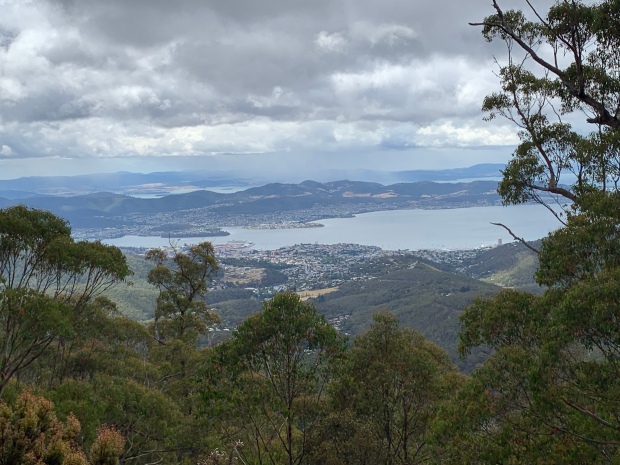 Google what this viewing platform is meant to look like! The top of Mount Wellington

This exhibit was like a ‘word waterfall’ – computer generated based on the most Googled words. Really amazing! 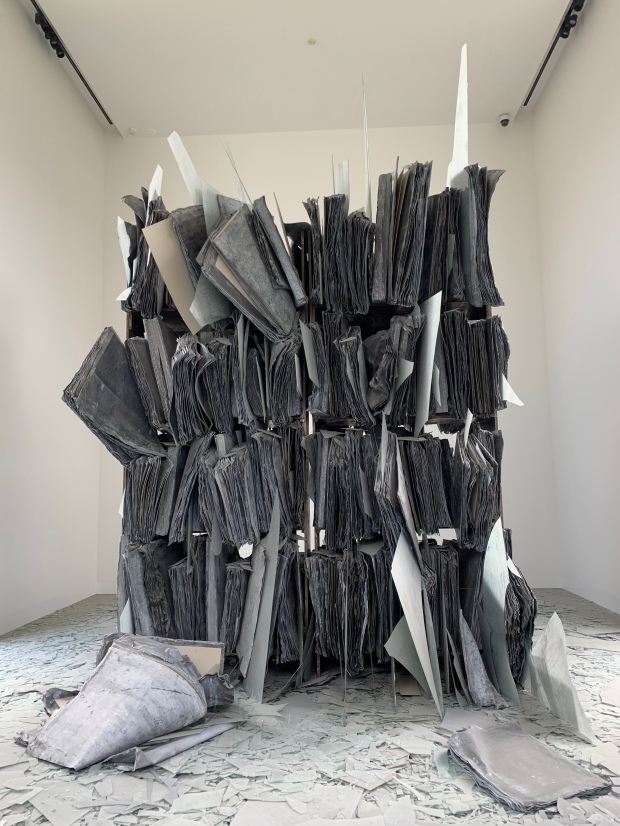 This was a room of screens with people all singing Madonna songs on a loop a Capella! We stayed in here for ages.